The first spring storm has been blown last week in Kitakyushu.
Spring is approaching! It’s going to be a season of meetings and partings.
NSTC has welcomed new mates earlier.
They are four, and are all girls!

Their names are “Little Anne” from no.1 to no.4
They are recruited by passing the tests by the Lead Instructor Ohba, who are very popular figure when talking about First Aid in our field. 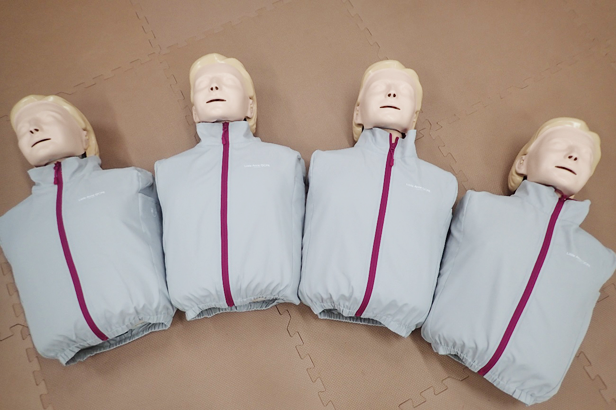 They are very beautiful four sisters and will participate actively for our training.
What kind of girl’s talk they would usually do will be interviewed by Instructor Ohba in the future.

NSTC will mark 9 years since the establishment in this April.
Training facilities and equipment are maintained daily, and updated or renewed if needed in order to have better quality in delivery of the training.
It has become popular in these days to say “welcome back to NSTC” to the delegates who have come back to NSTC for the refresher training. We will try our best to have you notice evolutions that we made.

+bonus episode+
Have you ever heard Resusci Anne, a name of resuscitation training manikin?
The followings are extract from Laerdal web site.

Because her identity could not be established, a death mask was made, as was customary in such cases. The young girl’s delicate beauty and ethereal smile added to the enigma of her death. Romantic stories that speculated on this mystery were published. According to one, her death was the result of an unrequited romance. This story became popular throughout Europe, as did reproductions of her death mask.

Generations later, the Girl from the River Seine would be rediscovered when Asmund S. Laerdal began the development of a realistic and effective training aid to teach mouth-to-mouth resuscitation. He believed that if such a manikin was life-sized and extremely realistic in appearance, students would be better motivated to learn this lifesaving procedure. Moved by the story of the girl so tragically taken by early death, he fashioned her mask for the face of his new resuscitation training manikin, Resusci Anne.

Inspired by The Girl from the River Seine, Resusci Anne has become a symbol of life to the millions of people throughout the world who have learned the lifegiving technique of modern resuscitation, and to those whose lives she has helped save from unnecessary death.

Her face is to be said that “the most kissed face”.