Finding my own Autumn

I love beer. A lager with a light taste that soaks into my throat. An ale with a mellow aroma that soothes the soul. Beers can be broadly classified into these two categories based on their brewing methods, but in fact, within each category, there are also subdivided styles. My particular favorite is a type of ale called IPA, which is characterized by its zesty aroma and bitterness.

Originally, IPA was created in Europe around 18th century, and although there are various theories, it is said to have originated from an idea to prepare beer with high alcohol and a lot of flavorings to prevent it from spoiling during long voyages.

So, why the men of the sea wanted to drink alcohol? –I am sure that, as one of those involved with the sea, I can understand the feeling. It is the same now as it was in the past, and probably always will be. I never thought that I would discover the universality of human beings through my favorite beer. 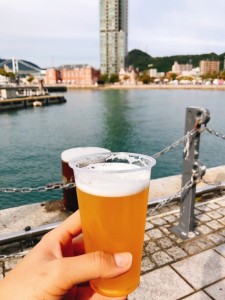 A straw will show which way the wind blows. Now, so much for the long yodeling. The season of contemplation is almost here. Why don’t you take a moment to ponder about your favorite things? You may be able to feel cheerful, or perhaps you may re-discover something that makes your life more enjoyable.